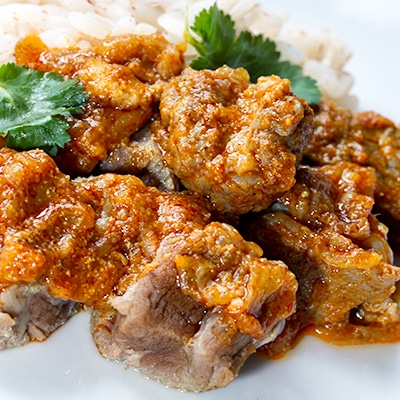 Kashmiri Lamb is based on a Kashmiri curry and takes full advantage of the plethora of wonderfully aromatic and flavoursome spices from the region. Our Go Spice Shikara Blend is the most authentic for this dish but may be substituted by Jammu, Kerala or Shimla to make an equally delicious dish.

Put the ghee or oil in a large saucepan over a medium heat. When hot, add the onions and Go Spice Blend, stir and fry for 10 minutes until soft.

Stir in the tomato puree and salt then add the lamb. Stir until the lamb is well coated with the other ingredients.

Add the water, bring to a simmer and cover the pan. Cook on a low heat for 1 hour or until the lamb is tender.

Once cooked, add the yoghurt, stir, scatter with fresh coriander leaves and serve. 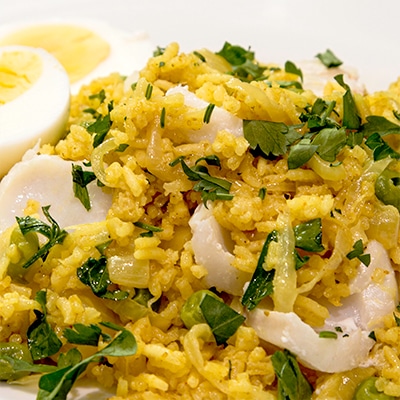 Kedgeree is based on the Indian dish called Kitchari, which, at its simplest, is a combination of rice and lentils, to which varying spices and perhaps vegetables may be added.  It was popular with the British while in India but they added smoked fish and brought it back to Britain as a breakfast dish, but I also enjoy it as a supper dish.

Put the milk and water into a large pan with the bay leaf and the smoked fish fillets, cover and bring to a gentle simmer, at which time the fish should be cooked through, if not leave in the liquid, heat off, for a couple of minutes. Remove the fish from the pan, discard the bay leaf, but reserve the poaching liquid. When the fish is cooler, break it up into flakes, discard the skin and remove any bones.

Heat the olive oil and half of the butter in a large saucepan over a medium heat. Add the onion and cook for about 5-10 minutes, stirring regularly, until it is soft. Add the Go Spice Blend and the rice and stir for 1-2 minutes. Add the peas and 300ml of the poaching liquid. Bring to the boil and cover, turn the heat down to the lowest setting and cook for 15 minutes, until the rice is cooked. Turn off the heat and fluff up the rice with a fork. Replace the lid until you are ready to serve the dish.

Put the eggs into a small saucepan of water and bring to the boil, turn the heat down a little and simmer for 5 minutes. Drain the water from the pan and cover the eggs in cold water to stop the cooking process and then peel off the shells. Fold the smoked fish into the rice with half of the parsley and the remainder of the butter. Cut the hard boiled eggs in half.

Spoon the rice and fish onto serving plates, top with the eggs and sprinkle over the remaining parsley. Add a wedge of lemon and season with salt and pepper to taste.